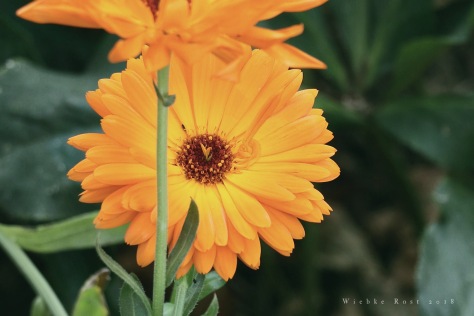 Marigold mirrors the sun – the flower’s radiant petals shine in bright yellow or orange colors from spring to late autumn. According to folk belief, simply looking at them does strengthen the sight. Their magic is – naturally – of the sun and the element fire. Calendula petals added to the bath water create a magical shield and help winning respect and admiration from other people.

The flowers are also perfect for the game “he/she loves me, he/she loves me not” (originally effeuiller la marguerite in French). Though plucking the flower is said to conjure thunderstorms! The flowers were also used in divining one’s future lover: the flower petals were dried with other summer herbs, then ground and made into a salve with honey and vinegar. Young women would then apply the salve before sleep and call upon St. Lukas to dream of their future love. Simpler yet just as effective: scattering the flowers under your bed,  they protect in sleep and give prophetic dreams, not only about future lovers, but also when it comes to revealing a thief, that has robbed you.

If you do not believe in the conjuring of thunderstorms, then you may plug the flower at noon, when the sun is highest in the sky, and it will strengthen and comfort the heart.

Peasants too, held marigold in high esteem, since they helped to predict the daily weather: if the flowers open early between 6-7 am, it would be a sunny day ahead; but if they stayed closed beyond 7 am the day would be rainy. The genus name Calendula hints at this: it is modern Latin diminutive of calendae, meaning “little calendar”, “little clock” or possibly “little weather-glass”.

Garlands of marigolds strung on the doorposts stop evil from entering the house.  Carried in the pocket, marigold helps justice to smile favorably upon you while in court.

Finally, in the past understanding the language of the birds must have been pivotal, and so it was thought, that if a girl touched the flowers with bare feet, she would be granted that skill.

Medicinal and culinary uses: Marigold is cultivated mainly in Germany and the Netherlands. The flowers are plucked manually or with machines and then dried. Flowers destined to be used as a decorative coloring agent, are dried at 80°C. The petals, fresh or dried, are added to tea and other food. Cheese and butter are colored with marigold. It can also be added to rice during cooking. While marigold itself does not taste like much, it enhances the taste of other food, similar to salt and can be added to pretty much any dish. Since marigold has been used to adulterate saffron, it is also known as “poor man’s saffron”.

According to the Committee on Herbal Medicinal Products, the medicinal effects of calendula are not proven, or better said, sufficient surveys are lacking. If you are allergic to other plants in the daisy family, you may avoid marigold.

Pot marigold in the garden: marigold is such an easy plant, with so many good traits, that it could almost be considered a sin, to not grow it! It grows basically anywhere and in any soil, but if you want a strong marigold, full of flowers then plant it – of course – where it gets all of the sun! A clayey soil seems to be favorable as well. Too much nitrogen fertilizer impairs flowering, likewise does a lack of potassium and phosphor. Elin Unnes suggests to do like Annemarta Borgen: in a bucket blend the seeds with peat dust and water and then simply throw it wherever you want marigold to grow.

While I adore the flowers of pot marigold, the real treat for me are the seeds. Not only, because they are so differently shaped, but because they seem to resemble little dragons or fossilized animal bones. And yes, the strange claws from the outside of the faded flower up to the small curled up things in the center are in fact all seeds! The German name Ringelblume means “ringed flower” and is derived from the curled shape of the seeds. Now, after a year of blooming there are plenty of them and they ensure a new and profuse generation of marigold plants – typical for annuals! If on the other hand, you mind your pot marigold multiplying exponentially, dead-heading is a thing.

Pot marigold seeds are rich in oils. Do you know about any uses for them?

Propagation by seed:  An easy plant that readily self-seeds! Sow from April – August. Sow 0,5 cm deep and cover loosely with soil. The seeds germinate within 2-3 weeks at temperatures around 20°C. Calendula thrives in sun to half shade. The soil should be fresh, humus rich or clayey and well drained. Plant 25 cm apart. The annual plant gets 50 cm tall, with bright orange or yellow flowers. Some garden varieties have extra large and filled flowers. Pot marigold has a long duration of flowering. The petals can be added to salads. The seeds are rich in oils. Calendula has a positive effect on the soil and can be planted as a companion in any cottage, ornamental or kitchen garden.

Addendum: the origin of pot marigold is unknown. Some say it once came to Europe from Egypt and then was carried on with colonists to the New World. Or it once escaped from gardens and then was naturalized all around the world.

Not to be confused with the French or Mexican marigolds in the tagetes family!