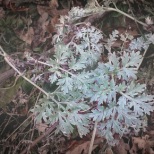 Wormwood is an ancient healing herb. Its medicinal uses date back to ancient Egypt, e.g. it is mentioned in the Ebers Papyrus from ca. 1550 BC. According to Pseudo-Apuleius, the Greek goddess Artemis lent her name to the herb (for reference see also mugwort). Artemis ruled over the hunt, wilderness, forests, wild animals, as well as virginity and childbirth. Wormwood was one of the herbs Artemis gave to the centaur Chiron – healer and teacher of Asclepius, god of medicine, who in turn named it after the goddess. The English name wormwood comes from Old-English wermod, hinting at its anti-parasitic properties, whilst absinthium, from old-Greek ἀσπίνθιον (absinthion), possibly means ‘unenjoyable’, a reference to the herb’s bitterness. There is also evidence of the existence of a wormwood-flavoured wine, absinthites oinos, in ancient Greece. Wormwood extracts and wine-soaked wormwood leaves were used as remedies by the ancient Greeks. Culpeper considered wormwood to help heal wounds inflicted by all stinging and biting animals (typically scorpions, snakes and stinging insects). Wormwood is mentioned seven times in the bible, each time connected to bitterness. According to hidden lore it grew in the trail of the serpent banished from Eden. The Greek would place boughs of wormwood under images of Hecate. Wormwood was one of the four main ingredients of Four Thieves vinegar, which protected four robbers from the pest.

Medicinal uses: Similar to mugwort, wormwood acts emmenagogue and stimulates the menstrual blood flow. It should not be consumed during pregnancy. It further soothes headache and acts anti-icteric, anti-inflammatory and anti-parasitic. Today it is mostly valued as an appetizer and digestive. It is used against gastritis and flatulence, to stimulate liver function and ease gastrointestinal cramps.

Magical applications: Wormwood is considered a strong protector and healer. It is used for protection from the Evil Eye and martial attacks, and is employed for returning a curse. It protects from evil spirits and malign souls. It is also used in necromancy and for rituals with the dead. Sprigs of wormwood are placed under statues and images of Hecate. Place a bundle of dried wormwood leaves on the altar or underneath a holy image. Add dried leaves to protection powders and sachets, necromantic and oneiric incense blends or dream pillows. It is also used in so-called ‘Kräutermützen’, which ought to help against insomnia. Combine with Mugwort for dressing a black mirror, e.g. in rites of Lilith.

Plant description: Perennial, hardy plant, grows 30–100 cm tall, with yellow flowers from June to August. They are pollinated by wind and carry tiny seeds. The plant may develop semi-wooden stems, which should be cut back after the winter. Used are the upper tops of fresh green leaves, which are harvested short before or when the herb flowers. The leaves are aromatic and bitter. They are used in cooking or boiled in water and drunk as a bitter tea. Wormwood is part of various herbal liquors and constitutes one of the main ingredients of Absinthe. The latter was temporarily illegal to distribute, due to high concentrations of thujone. Decoctions with wormwood contain significantly less thujone than alcoholic tinctures. The strong bitterns in turn are only removed through distillation.

Propagation via seed: The seeds need light to germinate. Sow on fresh seeding compost that has been mixed with sand, press on soil and do not cover. Keep warm and moist but not soppy. Germination temperature: 18-20°C, germination time: 1-2 weeks. Separate young plants and plant outdoors when strong enough, in full sun or semi-shade and e.g. on the south side of a dry stone wall. Soil can be loamy and sandy. Protect young plants from slugs.

CAUTION: Wormwood contains Thujone, which can cause stupor, nausea, nervous dysfunctions and kidney damage. In addition the herb may act abortifacient.