The fronds of the male fern fade during the winter time and leave behind a flaky root-stock, which grows bigger every year and turns black at the center, whereas new fern fronds sprout at the periphery. I like to think, as the years pass, the root begins to look like the scaly back of a dragon hiding beneath the earth, whereas the fronds form the dragon’s wings…

…and one may even spot the dragon’s head lurking in the soil.

The root has been used until recent times as an anthelminthic to expel tape worms. This is supposedly due to flavaspidic acid, a Phloroglucinol derivate, which is contained in the glandular hairs. The root stock and leaf stalks are deadly poisonous, especially in young plants. Overdosage may result in severe poisoning and death. 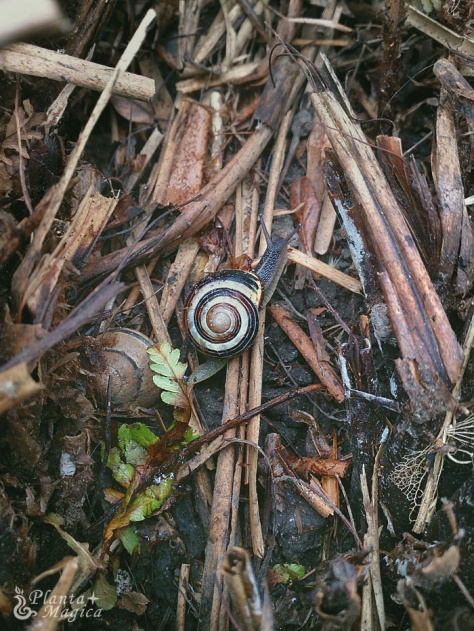 Banded grove snails (Cepaea nemoralis) overwintered between withered fern fronds. Snails and slugs are a gardener’s nightmare, though I’d like to think these banded snails are the “good ones” as opposed to the brown Spanish slug (which I myself battle by the means of sharp iron tools and worse).

However, not only gardeners of modern times are struggling in the fight against terrestrial molluscs, but also medieval knights went to battle the creatures in full armor, as a recent article at the Smithonian.com website elucidates utterly strange and still unexplained depictions in medieval manuscripts:

And as if that wouldn’t be enough, snails occur also as a metaphor for death and withering in the biblical Psalm 58:8

As a snail which melteth, let every one of them pass away: like the untimely birth of a woman, that they may not see the sun.

Not enough? I strongly recommend you to check out the Hunting for Snails blog, for a plethora of wondrous examples of snails in medieval manuscript art and this collection by the British Library.