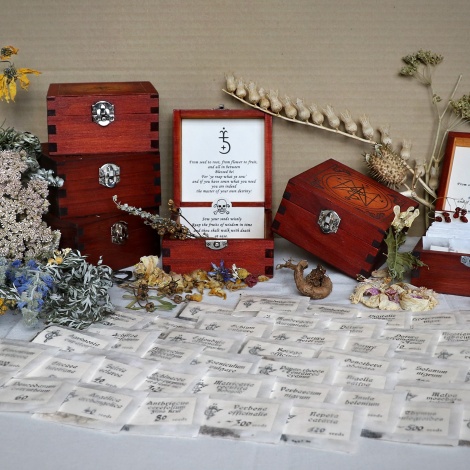 I spent this month mainly with work on the next row of wooden seed boxes, adding new herbs to the set and reading up on them. The central theme this time were summer herbs (with the summer solstice in mind), which are sown in spring or early summer, such as poppies, cornflower, chamomile, evening primrose, yarrow, viper’s bugloss etc. Then I paid attention to Harold Roth’s book “The Witching Herbs” (signed copies available here), and included seeds for the magical herbs discussed there. Besides these I added some endangered plants such as the wonderful centaury and plants that are in decline, such as the field larkspur. With wood betony and motherwort there are some new old, forgotten about healing herbs joining the series.

Another herb I was curious about (and I know that you are too), is the enchanter’s nightshade. It is quite inconspicuous in appearance, almost invisible between other herbs. It is not poisonous at all and in fact, much more beneficial than, what its name suggests. This makes for some very interesting treats for employing this herb in sympathetic magic…

Along with adding more new herbs I also updated the sowing tables and added info texts for each. Further, my attention was drawn to the Euphorbiaceae plant genus. Last year I had been pointed to the spurge as part of a Martial incense recipe. I started researching but could not pinpoint which type of spurge was meant. There are many plants in that genus, which is found in large diversity all around the globe. But which is the one most relevant in Western medieval / renaissance magic? By chance and when searching for spurge seeds, I came across a seller on eBay who just mentioned randomly that the caper spurge (Euphorbia lathyris), with its impressive size, poisonous milky sap and auspicious shape, was the plant famously believed to break hexes and ward of witches from one’s home…. Well, here we go. It is now added to the selection of poisonous herbs coming with the boxes and I can’t wait to grow it myself.

What more? I finished and shipped the last of my “Poisoner’s” seed boxes. I will now overthink the concept and design for this one. 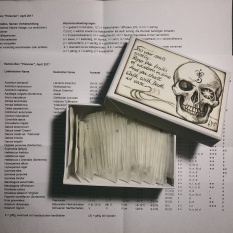 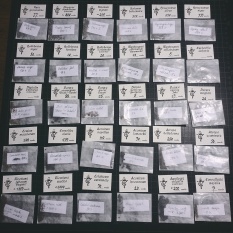 I also spent a lot of time in the garden, harvesting masterwort root, thinning and weeding out, pricking out seedlings and sowing more… 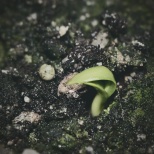 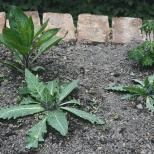 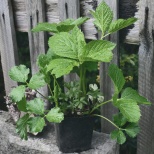 My shortage of henbane last winter led me to sow new henbane, which resulted eventually in hundreds of little plants of black, white and the rare Egyptian henbane! These have now been separated and planted in trays of 24 each + 1 mixed tray. The temperatures are still low and even though it did not actually freeze again, it is too cold for the small plants (the test tray doesn’t seem to like my outdoors experiment on the window sill). I am therefore keeping the trays with the white and the Egyptian henbane indoors, together with purple Indian datura and several moon vine plants. The tray with the black henbane seedlings stays in the unheated greenhouse. 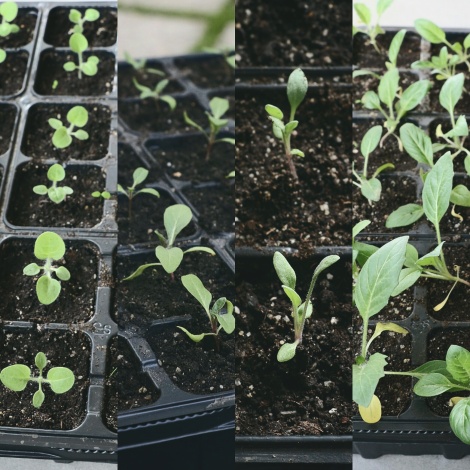 Besides, l am now a lady with a barrow full of fragrant lily of the valley! 🌱🌱🌱 (Thanks to an unexpected gift from our neighbors, who are restructuring their garden.) I now have to prepare a spot for them to grow. Else, that barrow has now met its final destiny… 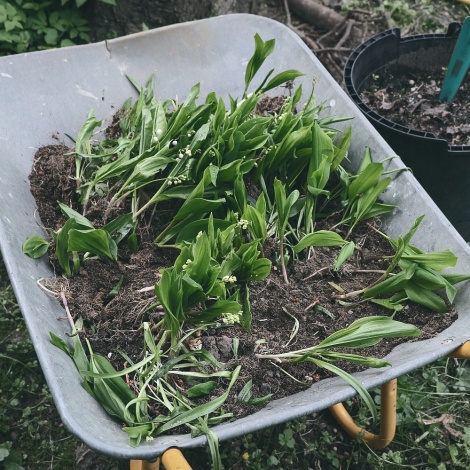 Herbs I plan to sow this and the following weekends:

So long, I wish my followers a Blessed Walpurgis!

Two early flowering plants in the amaryllis family (Amaryllidaceae), the common snowdrop (Galanthus nivalis) opens its flowers just a few weeks earlier than the spring snowflake (Leucojum vernum). Both carry white, bell-shaped flower heads, sporting a green or a yellow spot on each sepal. Both do also contain poisonous alkaloids, that are a natural self-defense against pests and animals. The same alkaloids are also found in plants of the Narcissus genus.

The flowers of the spring snowflake typically appear after the snow melts, usually in late February and beginning of March. They are shaped like a cup, which gave them the name Märzenbecher in German, literally meaning “March goblets”. The Latin name Leucojum consists of the Greek word leucos for “white” (a bright, shiny white) and ion for “violet”. The flowers emit a sweet fragrance. The epithet vernum comes from the Latin word for “spring”. Other names are snowbell, dewdrop and St. Agnes flower.

The flowers of the snowdrop open in early February, often as early as Candlemass. They are more tender and when still closed, resemble a tear drop or look like a popular type of earring,  called Schneetropfen in German. The English flower name snowdrop is thought to be a direct translation. The name Galanthus derives from the Greek words gala for “milk” and anthos for “flower”, whereas the Latin epithet nivalis means “of the snow” or “snow-covered”.

For some reason the snowdrop features more prominently in folklore and is now the flower associated with February, Candlemas cleansing rituals and the virgin Mary. I have blogged about this earlier. Interestingly, it seems to be missing in medieval scripture and early Christian paintings. Therefore, the snowflake is to be found on a painting of the Paradise Garden from the early 15th century. Here it is placed next to the infant Jesus and below the hem of Mary’s blue dress:

I found this painting thanks to the Met Museum’s garden blog and include it here, as it features many interesting flowers… Another fragrant, white flowering plant portrayed there is the lily of the valley (Convallaria majalis). It is a distant relative of the former and flowers much later, in May. Though named after the biblical “lily of the valleys”, it is uncertain which plant is originally referred to in the Song of Songs.

The spring snowflake is found spreading across river valleys and forest glades, taking advantage of the early spring sun and blooming when the trees are still leafless. I remember the sight of snowflake-covered meadows in the Polenztal, Saxon Switzerland: shiny white flower-cups and droplets from melting snow, reflecting the light of the spring sun; in the distance the sound of the bickering brook…

It is not surprising, the white flowers of early flowering plants would become symbols of purity and holiness. But there are also darker aspects connected to each of them, some of which I’m currently researching in context with a new incense formula. More about this later…

Springs Snowflakes, by ferrebeekeeper + Snowdrop and Snowflake , at metmuseum.org +